There is no higher impact practice for artists than to stand before your work in a public space and engage your audience. I work with students in all of my classes to prepare their work for exhibits. While many institutions reserve this for the final semester, I firmly believe that this is something radically improved with repeated practice. This is a student video created to advertise a student exhibit that I curated with several students featuring video and interactive sculptures. Work from my 3D and Honors class were on display

Then there was the Reception 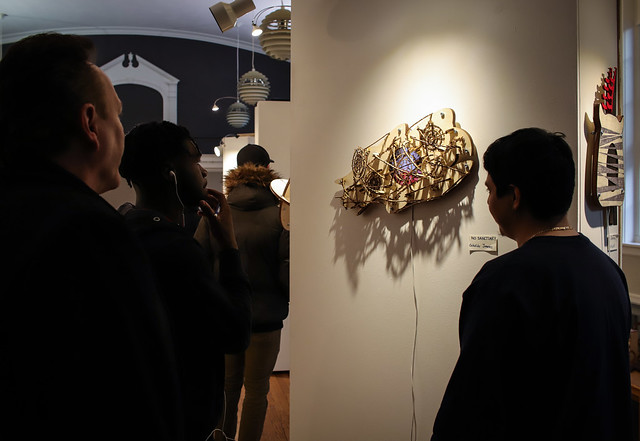 I had the opportunity to co-teach with incredible creative partners that provided really rich critical analysis and great assignment advice to our students. An exhibition that followed received RAVE reviews from all that saw it including many artists and art curators stating that we were clearly pushing the boundaries of contemporary art practice.

Both classes, in very different ways, utilized a collection of recently retired iPads. Students composed sculptures that encapsulated those iPads making only small portions of the screens visible.

In the Honors, Interdisciplinary course a musician, named Dominic Johnson, instructed students on composing musical compositions using iPad instruments in small groups. These bands rehearsed their compositions for a live performance. Meanwhile with me they created sculptures that allowed the iPad to interact both ergonomically and visually interestingly with their body. Some hung from them like guitars. Others rested under their chins or wrapped around their bellies. The students performed their original works live before a studio audience and multiple cameras. The recording was then mixed down and exhibited along with the student’s interactive instruments in an exhibition, called 4D: It’s About Time, in the Student Alumni Gallery at the Visual Art Center.

In the 3D Design Class I had the opportunity to work with an incredible volunteer instructor. My wife, Pei San Ng, an intermedia artist and architect led critique sessions with students as they explored the intersection of virtual reality and sculpture. Students created immersive spaces using virtual reality tools. They then shot documentary style videos in those virtual spaces and began designing sculptures that would allow an audience to enter / explore / navigate or peep into those worlds. The sculpture evolved radically over the last month of class as the guest critic asked the students to broaden their interpretation and recontextualize their ideas. Students merged newfound understanding of digital illustration, materiality, laser cutting, virtual reality and video editing to create sculptures that felt truly novel and unquestionably intermedia.

I worked with a few of the outstanding students from the class to design an exhibition of the work. 4D: It’s about Time opened at the Visual Art Center at SXU  in January and ran through the end of February. The title speaks to the fourth dimension of time in several ways. First the obvious connection to musical time, without which music devolves to sound. The second is the long wait of many video artists for the opportunity to use video as just another layer of a sculpture. From the invention of the iPad as a tool for communicating, sketching and consuming art many video artists recognized it’s slim profile and interface as a potential tool for layering video into art. However the tool has always been a little cost prohibitive. Many video artists, like myself, have been waiting for the moment for these first iPads to reach obsolescence so that we can play with them and remix them and just create with them as a media to mix with other material like wood or fur, just the way we did in this class. It’s about time!

Mounting this exhibition was no small task. There was first the necessity to power 27 separate video sculptures. Some of the iPads were faulty. Some of the sculptures lacked sophistication in their construction. The biggest issue, though, was lighting the sculpture. Sculptures need to be lit differently than 2D work. Although there was sufficient wall space for the sculptures there was not a sufficient quantity of lights.  Drawing on previous gallery experience and my own private stash of gallery lighting equipment I was able to rig a combination of track lights from wall to wall.

This exhibition was supposed to travel from the SXU Visual Art Center to the Beverly Art Center in March but was postponed due to the pandemic. This would have been the first SXU Art & Design Department student art show to be promoted from college to professional art center as a whole. This is an important landmark in my opinion and demonstrates the caliber and power of the art that these students created. I think that it also demonstrates an interesting new pursuit for our students with a roadmap for them to follow.