The Art Department received a call from a colleague in the Education Department at Saint Xavier University.

The question was, “Can you paint a mural on stage as people tell stories?”
The answer was, “Sure, Right?”

The art department does not have a muralist, or a mural class, or a performance art class, but we have many eager creatives aware of how to paint.

The Warmup
The painting group formed and thought it might be a good idea to practice collaborating on a big canvas.
We set up ten canvases in a circle around the room.
One was long, one medium and two were little short canvases.
We turned on the cameras and we jammed.

During the jam we played loud music and talked about Improv actors and jazz musicians. Collaboration and improvisation were key. Expectations were shifted.

The Live Audience
One week later we were on the stage in McGuire with a slightly different cast of painters and inspiring stories. The event was called A Tribute to Peace, and featured several Southside Chicago storytellers.

We set up five canvases in the painting studio making a mural 4ft X 20ft.
We turned on the cameras and jammed.

We had no plan for the mural. We figured that as long all the painters agreed to peacefully coexist in the painted space, that we were leading by example. 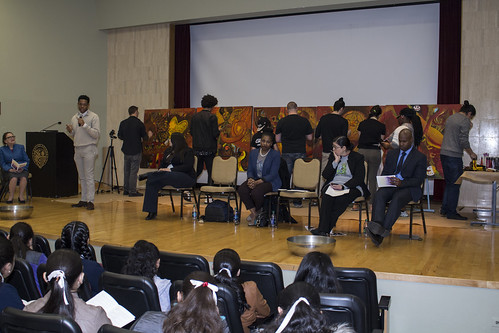